With multiple articulable joints and lock adjustments, the REEL Splint can be used in extreme cases like injuries resulting from IED’s and penetrating trauma. 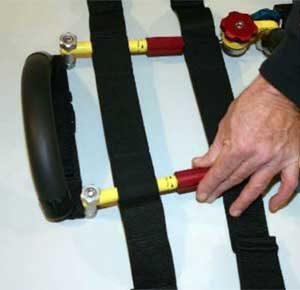 For many years, the standard of care for lower-extremity injuries has been somewhat limited by the relative level of technology and materials designed to handle their potentially complicated injury patterns. Most in EMS have traditionally been trained to utilize a few standard options such as padded board splints, ladder splints, and traction splints, along with the complicated means necessary to secure them by means of cravats and/or straps. All of these solutions, however, are restricted in their ability to meet the gold standard of actually securing an injury in the position found, especially when more than one significant injury, such as compound angulated fractures, is present.

The simple act of splinting with a board splint, for example, presented a dilemma: if faced with a potentially unstable fracture (which isn’t truly known until x-ray or even MRI in a hospital setting), it simply may not be a viable option because the pressure of securing it, or the angulation necessary for doing so, could compromise the injury site or perhaps even worsen the existing injury.

Ladder splints, for their part, can be unwieldy and again may not protect the injury site fully, and may also be difficult to secure without putting additional pressure on an injury site. Traction splints are of course only useful in a very limited setting: that of a femur fracture without additional injuries to the leg, which again may be difficult if not impossible to ascertain in a traumatic setting.

The other main option available to EMS is the pillow splint, but that too comes with complications: it simply does not do as good a job of immobilization overall, may not be large enough to secure the injury site completely, and can obscure the injury site after application, preventing ongoing assessment of injury and CSM at the site and distally.

Obviously, having some form of immobilization has traditionally been better than none in the vast majority of cases, however a number of years ago, REEL Research began evaluating a better way of securing these complicated injuries. By ensuring proper immobilization to reduce loss of function and prevent further exacerbation, while potentially also helping to relieve pain and reduce circulatory compromise, such a device would improve patient outcome in many ways. The results of that research are a remarkable product: the REEL Splint.

The splint system is a hybrid design, which combines the need to have a traction splint on board with a system that allows for a wide array of configurable positions to conform to the injury being stabilized. At the distal end of the splint, two Quick Disconnect sleeves allow for a very well-designed traction ratchet to be added on to attain traditional traction-splint functionality, except with a much higher quality of construction and materials than many that this author has seen in his experience. Where the splint really shines, however, is when that traction ratchet is detached.

One of the key components which contributes to the versatility of the device is the anatomical pivoting ischial pad, which assures proper alignment of the splint with the patient’s ischial pathway angle, especially important in high-location femur fractures, but also critical in any lower-extremity injury for maintaining position of function. This has always been a challenge given the sheer variety of anatomical variances in lower extremities, and before the REEL Splint, something which was near-impossible to attain with more traditional lower-extremity splints (such as the all-too-familiar picture of a board splint extending up beside the patient’s armpit or down far beyond their feet).

Position of function, of course, is a fairly well-established concept based upon a slight flexing of the knee and a normal anatomical relationship of the limb. Achieving actual function, however, can take on a wide variety of meanings depending upon the nature of an injury. Generally speaking, the concept of a positive midline stabilization is an important concept, however, where if the injured extremity can be stabilized along its midline, it has a much better chance of maintaining positive CSM and having a better long-term recovery potential. This doesn’t mean that EMS is looking to re-align displaced fractures on a daily basis, of course, but the fact is that sometimes that’s exactly what is required if function is to be restored.

With multiple articulable joints and positive-lock adjustments, the REEL Splint’s shape can be changed to align with the patient’s injury and their anatomy. Achieving midline stabilization therefore becomes a real possibility, along with providing a stable, flexible platform to work off of and secure to if a realignment of the joint/injury is necessary due to compromised distal CSM. Especially with challenging injuries such as blunt-force or explosive trauma, that could mean the difference between amputation and/or serious loss of function, and rehab into walking again.

Compartment syndrome is an especially odious foe with knee injuries, and the REEL’s design allows you to secure the patient’s leg without placing undue pressure above and below the knee capsule, such as you might find by securing a board splint with cravats. Because of the unique strapping system used by the system, EMS providers will also find it easy to re-assess an injury site due to the ease of placing straps away from those parts of the extremity while still maintaining positive immobilization. Extrication handles built into the device also make it easier to move the patient once secured without causing either undue discomfort or the bane of traction splint usage, slippage of the ischial pad and therefore displacement of the splint.

One other advantage that the system offers other than its customizable immobilization is a compact, folding design with a relatively lightweight construction. The US military has widely deployed the REEL system due to these factors alone, and also because of its superior ability to handle such challenging injuries as penetrating trauma and injuries resulting from IED’s and other explosive devices, where shrapnel within the leg can be life- and limb-threatening if the leg is moved the wrong way. This also means that it takes up less space in the rescue vehicle and can be stored where it is more easily accessible.

Finally, something which everyone has to consider in these times of the reduced budget, is the reduction in costs seen with using the system versus the more traditional splinting methods. Costs for tape, board splints, cravats, and other perishable supplies is virtually eliminated. Since the REEL Splint is autoclavable and easy to disinfect, time-in-service is easier to maintain than with replaceable items which require a crew to restock frequently.

Advances in modern technology and materials have made a significant difference in patient morbidity and mortality. The REEL Splint system for both adults and pediatric patients is a significant innovation in that direction, and can make all the difference in the world for your patient base while also fitting the needs of your agency in terms of cost management. It represents a new standard of care in the management of the lower extremity injury, and its adoption by the military speaks to its applicability to nearly any trauma setting within our civilian EMS systems as well.